Last week, Fannie Mae released their Home Purchase Sentiment Index (HPSI). Though the survey showed 77% of respondents believe it’s a “good time to sell,” it also confirms what many are sensing: an increasing number of Americans believe it’s a “bad time to buy” a home. The percentage of those surveyed saying it’s a “bad time to buy” hit 64%, up from 56% last month and 38% last July.

“Consumers also continued to cite high home prices as the predominant reason for their ongoing and significant divergence in sentiment toward homebuying and home-selling conditions. While all surveyed segments have expressed greater negativity toward homebuying over the last few months, renters who say they are planning to buy a home in the next few years have demonstrated an even steeper decline in homebuying sentiment than homeowners. It’s likely that affordability concerns are more greatly affecting those who aspire to be first-time homeowners than other consumer segments.”

A mortgage payment is determined by the price of the home and the mortgage rate on the loan used to purchase it. Lately, monthly mortgage payments have gone up for buyers for two key reasons:

Based on these rising factors, a home may be less affordable today, but it doesn’t mean it’s not affordable.

“Still, the latest level is within the 28 percent standard lenders prefer for how much homeowners should spend on mortgage payments, home insurance and property taxes.”

“Average workers across the country can still manage the major expenses of owning a home, based on lender standards.”

What’s that mean for you? While you may not get the homebuying deal someone you know got last year, that doesn’t mean you shouldn’t still buy a home. Here are your alternatives to buying and the trade-offs you’ll have with each.

Some may consider renting as the better option. However, the monthly cost of renting a home is skyrocketing. According to the July National Rent Report from Apartment List:

“…So far in 2021, rental prices have grown a staggering 9.2%. To put that in context, in previous years growth from January to June is usually just 2 to 3%. After this month’s spike, rents have been pushed well above our expectations of where they would have been had the pandemic not disrupted the market.”

If you continue to rent, chances are your rent will keep increasing at a fast pace. That means you could end up spending significantly more of your income on your rental as time goes on, which could make it even harder to save for a home.

Alternative 2: I’ll wait it out.

Others may consider waiting for another year and hoping that purchasing a home will be less expensive then. Let’s look at that possibility.

We’ve already established that a monthly mortgage payment is determined by the price of the home and the mortgage rate. A lower monthly payment would require one of those two elements to decrease over the next year. However, experts are forecasting the exact opposite:

Based on these projections, let’s see the possible impact on a monthly mortgage payment: 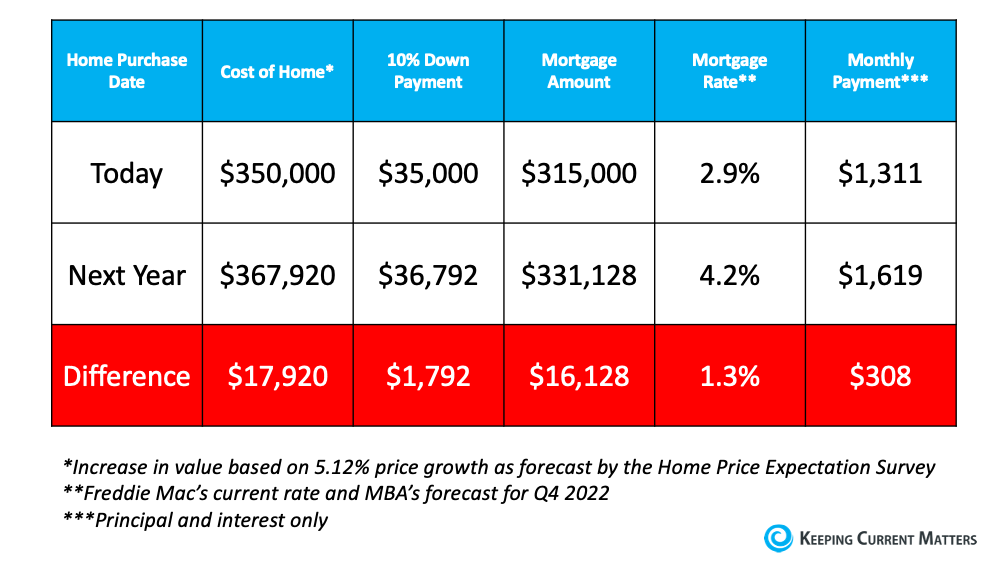 By waiting until next year, you’d potentially pay more for the home, need a larger down payment, pay a higher mortgage rate, and pay an additional $3,696 each year over the life of the mortgage.

"We were fortunate to work with Nicole. She is very professional, energetic, and really nice person. Many times she went extra mile to make purchase of our mountain cabin as smooth as possible. Nicole guided... continued"
- Roman Valajev
View All