Article Written By: James Barron at The New York Times

Eighteen years have passed since terrorists commandeered airplanes and the twin towers of the World Trade Center were brought down.

The commemoration at ground zero — by now an annual rite of remembrance that follows a familiar, somber script — began with an honor guard carrying the flag.

At 8:46 a.m. on Wednesday, the time when the first plane slammed into the north tower, there was a moment of silence, the first of six marking the strikes at the trade center and the Pentagon, and the plane crash in Shanksville, Pa., as well as the collapse of the twin towers in a blizzard of toxic dust and flaming debris. Bagpipers played “America the Beautiful.”

President Trump and the first lady, Melania Trump, led a moment of silence at the White House before going to the Pentagon, where 64 people aboard a hijacked American Airlines jet were killed, along with 125 people in the building. The president proceeded to say that any terrorist who comes to the United States will be met with a force “of which the United States has never used before.”

Mr. Trump delivered his remarks at the Pentagon days after canceling peace talks with the Taliban, which ruled Afghanistan in 2001 and provided a haven for Al Qaeda, the terrorist group that hijacked the planes in the attacks.

In Shanksville, Vice President Mike Pence spoke at an observance celebrating the heroism of the passengers aboard the plane who took on the hijackers and sacrificed their lives.

At ground zero, readers began reciting the names of the dead, one by one — brothers, sisters, cousins, mothers, husbands, wives, a solemn process that lasted nearly until the end of the ceremony, shortly after noon.

Some family members brushed away tears as the names were read. Some carried flowers or wore T-shirts with names. Some held placards above the crowd with images of their loved ones. And others who attended said they had their own traditions that they followed.

Margie Miller, whose husband, Joel, died, said she always goes to the place at the memorial where his name is engraved. She touches it tenderly. He was 55 when he died. He was an assistant vice president at Marsh and McLennan, the management consulting firm. His office was on the 97th floor.

“This is his place, and it’s my place,” Ms. Miller said. “It’s where I feel him. He breathed here and he died here.” 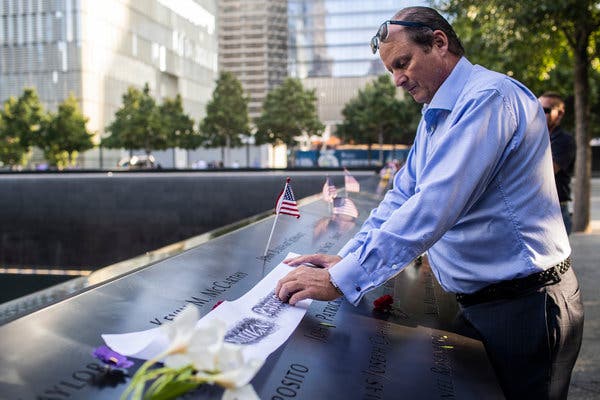 La-Shawn Clark said this anniversary was a particularly difficult one because her husband — Benjamin Keefe Clark, an executive with Fiduciary Trust International who was 39 and whose office was on the 93rd floor of the south tower — cannot share a milestone, the birth of their first granddaughter, due next month.

She said that for weeks after the attacks, as the rescue and recover teams did their work, she would call her husband’s cellphone just to hear his voice on the voice mail message. She knew she would not get an answer, she said, wiping away tears.

She said that the memorial was where she sensed his presence the most. “There’s never closure,” she said, “but when I come here, when the wind blows, it’s like he’s kissing me.”

In the years since the attacks, those who were children in 2001, like Ashley Nelson, have grown up and found their places in the world — a world that has struggled to adapt to terror attacks. Ms. Nelson was 6 years old in 2001. On Wednesday she paid tribute as she stood silently, her arms crossed, near the ceremony.

“It helps me put things into perspective,” she said, even though she did not know anyone who was killed in the attacks. “The importance of remembering the people that lost their lives and who sacrificed, that’s important to me.”

Steve Knowles, who lives in Fairfield, Conn., caught a 6:15 a.m. train to Manhattan. He wore a Yankees cap and a red, white and blue windbreaker, snapping photographs of the ceremony from across the street.

“I felt the need to be here,” he said. Sept. 11 was “a profound moment that changed and is still changing all our lives in ways we couldn’t imagine then.”

The 18th anniversary, not a major milestone like the fifth or the 10th, is taking place in an area that rebounded as it was rebuilt and, some say, as the country moved on. The crowd outside the ceremony thinned as the morning went on.

Men and women in business clothes rushed from one appointment to the next. Riders on Citi Bikes shouted “bike lane” to oblivious pedestrians who were standing in their way while texting on cellphones.

But for the families whose relatives were killed, the grief remains as piercing and profound as ever.

The anniversary came on another bright late-summer day in New York, but this time there were clouds hugging the horizon, in contrast to the clear blue sky of Sept. 11, 2001.

For many New Yorkers, the anniversary was just another day — which, of course, was what people thought the day of the attacks was going to be. In the morning, children went to school. Adults went to work. It was Primary Day in New York. Some stopped to vote on their way. 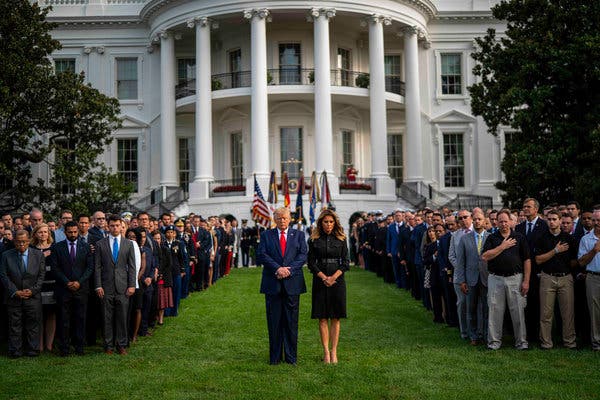 At the trade center that morning, people picked up coffee and walked across the plaza, the way they always did. No one going through the revolving doors or stepping into the elevators knew then that it was the last time they would ever do that.

Nor did anyone there know that “Sept. 11” was about to become one of those dates that would summon personal memories as powerful as those associated with Nov. 22, 1963, the Friday on which President John F. Kennedy was assassinated, or perhaps Jan. 28, 1986, the Tuesday on which the space shuttle Challenger exploded little more than a minute after takeoff.

There are now 400 trees where the rubble was in 2001. For the ceremonies, loudspeakers were hung — carefully — from many of the trees. The idea was that the names being read should be heard from anywhere on the memorial’s eight-acre site.

From the first 9/11 commemoration, long before a memorial and a museum paid tribute at the site, the reading has been a meaningful ritual that recognized each person caught in the tragedy of that day. But something was different this time: The 9/11 Memorial Glade, dedicated in May. 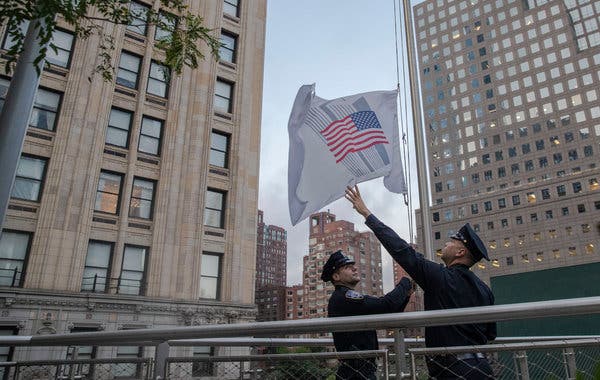 It honors another segment of the 9/11 community, those who were exposed to toxins in the aftermath of the attacks — people who worked in the twin towers and escaped; police officers and firefighters who went through rubble that burned for more than three months; and residents of Lower Manhattan who breathed the same air. Some have developed chronic illnesses. Some have died.

The Glade, a series of large stone “monoliths” inlaid with steel from the original trade center, was dedicated on another grim anniversary, the 17th anniversary of the official end of the recovery mission at ground zero. At 13 to 18 tons apiece, the monoliths were so heavy that they had to be installed with two cranes that lifted them over the tall white oak trees on the plaza.

The platform for the readers stood in the shadow of a One World Trade Center that is no longer new — people took note of its rise toward the sky at earlier ceremonies, but the construction fences that once lined the area are long gone. The new One World Trade Center opened five years ago, the observatory on its top floors more recently.

At ground zero, “The Star-Spangled Banner” was sung by Kassidy Rieder, daughter of Nancy Collins. Although Kassidy Rieder is too young to remember Sept. 11. Her mother, Nancy Collins, is a police officer who worked at ground zero during the search and recovery operation — until she discovered that she was expecting Kassidy. "Nicole Folks was a tremendous realtor for us. We owned a Tahoe Donner condo for over 17 years, and used it only for our family, never renting it out. It was our home away from home, winters and summers.... continued"
- Michael Yarymovych
View All